Our Correspondent and Secretary, Mrs.Vimala Britto received the VISIONARY LEADER of the year Award.

It was a great honour receiving the awards from Dr.Pant, Brand Ambassador Centre for Educational Development during the EDUSUMMIT and EDULEADER Conference held at Hotel Radisson Blu, Bangalore on 22nd and 23rd June 2018. Earlier in January 2018, our school received the Top CBSE school award.These Awards received is a huge recognition for the tremondous efforts of the Visionary leader in bringing about a radical change through empowerment if the Teachers and leaners.

We're not around right now. But you can send us an email and we'll get back to you, asap. 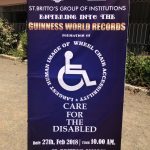 GUINNESS WORLD RECORDS, CARE FOR THE DISABLED by St. Britto’s Group of InstitutionsCSR